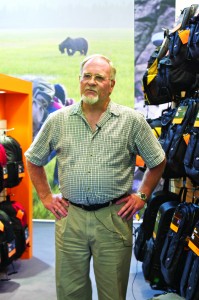 Folks are often curious about Greg Lowe, the original founder of Lowepro. Is he a real person or just part of the corporate story?  And if he is real, what’s he up to these days?

Greg Lowe is definitely a real person — and an amazing one at that. He is the ultimate entrepreneur, founder of both Lowepro and Lowe Alpine, an accomplished mountain climber, photographer, Adacemy Award nominated cinematographer — in other words, larger than life. 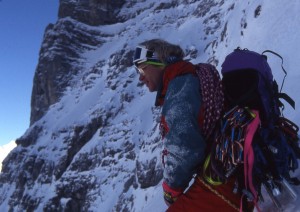 Greg’s brother, Jeff Lowe, is famous in his own right. As a legendary mountain climber, he has the distinction of being the first — and only — person to climb the nearly impossible route up the very center of the Eiger Nordwand in Switzerland. The story behind this incredible feat has become legend. For nine days in the winter of 1991, Jeff’s climb was all the more amazing because he was totally alone — no partner, no assistance from ropes or bolts left by previous climbers. Near the end, out of food, wet and chilled to the bone, he underwent a transformation that literally changed his life. 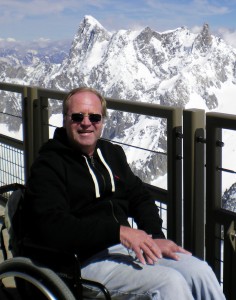 Now, 19 years later, the brothers are teaming up to film Metanoia, an inspirational, feature-length documentary about Jeff’s life and climbs. With Greg directing and their eyes set on the late summer deadline for submissions to the Sundance Film Festival, they will soon be heading back to the Eiger to film Swiss climber Ueli Steck as he attempts to recreate Jeff’s historic climb.

Today, Jeff is confined to a wheel chair due to a rare, degenerative neurological disease. But as this project suggests, nothing has dampened his spirit. He is hard at work, raising funds to complete this project and will be right in the thick of things as the team films in Switzerland — getting back up in a helicopter to oversee the aerial shots and, in his own words, “having the most fun he’s had since the disease forced him to quit climbing seven years ago.”

So now you know. There is definitely a Greg Lowe, and he’s part of a family who continue to leave their mark  on the world.

Sam is the PR and Photographer Relations Manager for Lowepro’s Worldwide Marketing team.